Thanks to Simone Joseph for writing this great article! 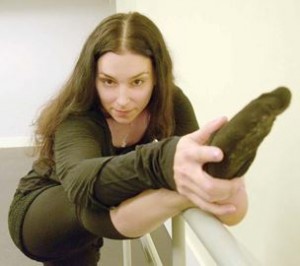 Dancing keeps you young and fresh, says Thornhill’s Lori Hannah Rybak, who teaches dancing to adults as a way of maintaining fitness.

Lori Hannah Rybak raises an arm, gesturing to the ceiling. She shifts her head side to side as she launches her body into another series of dance moves.

“This is very good for my positive outlook today,” says Hannah Rybak, a professionally trained dancer. “I don’t usually have someone standing there while I am dancing saying ‘Yes!’

She launched her company Dancified – Dance Classes for Grownups — offering dance classes for adults, both beginners and professionals — in October.

They are a mix of exercise and dance, something she found missing in Thornhill after she had her own two children.

She has taught all ages and levels, but enjoys teaching dance to adults the most.

“Adults aren’t there [in class]because their mother made them,” says the Ottawa native, who has lived in Thornhill for nine years.

She trained at the Broadway Dance Center in New York and Giordano Dance Chicago.

When she had children — a daughter in 2004 and a son in 2006 — she took a break from dancing. Wanting to stay active, she looked for a fitness class with dance elements, but had a tough time finding anything that suited her needs.

She used to live in downtown Toronto and had found many adult dance classes in the city from which to choose. However, she says Thornhill lacks such offerings.

She found that the gym classes and odd exercise class that incorporated dance were very repetitive, she says, and learned that others felt the same way.

She was determined to change this.

“I have the ability to do something about this,” she remembers saying of starting her own dance program. “I found my mission.”

Dancified offers a wide variety of daytime dance programs, such as Hip Hop, Dancer Fit, Lyrical Mix and even one program called Heels.

You can drop in to a single class for $15 and many programs started up again this week after the holiday break.

Today, on a Monday morning over the winter break, Hannah Rybak dances a mix of routines she makes up on the spot, as well as dancing some numbers she already knows for the photo session.

“Let’s see if I remember this,” she says suddenly.

Springing forward, she dances to the song Show Me How You Burlesque from the movie Burlesque, recorded by Christina Aguilera. Next, she switches on the Van Halen song Jump and launches into moves that look more like ballet. It’s an odd combination of dance and song, but somehow, it works. She spins her body round and round.

“It would have been a better show 10 years ago,” she quips.

She turns 40 in April, but says she certainly doesn’t feel it.

“Dancing keeps you young and fresh,” she says, also giving credit to her children for keeping her active.

“I am also a mom to two awesome kids who laugh at my car dancing daily.”

She admits she often dances through the grocery store to music on her iPod, not caring if she gets strange looks.

She also easily laughs at herself and her failures — at the fact that by age 7, she had failed miserably at piano, swimming and gymnastics.

It was only when her older sister took dance and she decided to try it as well that she found her passion. While her sister took jazz, she took tap as her first class, because it was the only available one at the same time as her sister’s.

“Once I went into that studio, that’s all I did.”